In his advanced years, Moe Thu, better known by his penname of Maung Moe Thu, has already become inseparable from his walking stick, but is still dancing—on canvas. 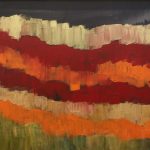 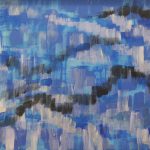 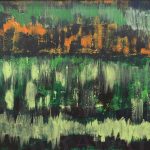 Since the 1960s, Maung Moe Thu has been a close friend of other pioneers in Myanmar’s modern art movement: Win Pe, Paw Oo Thet, Kin Maung Yin, and Ko Shwe Aung Thein. But it was only in 2007 that he started drawing.

“I wanted to make paintings since that time. But they didn’t like me drawing,” he said, referring to his old friends. “Because I used their paints,” he added with a smile. “You couldn’t buy paints as you wished at that time. Also, my career was writing and shooting films,” said the author of more than 30 translated books, who still writes articles in weeklies.

While working as a writer, publisher, director and scriptwriter, he joined the National League for Democracy when it was established after the 1988 pro-democracy movement. He was later jailed for seven years for his political activities, and his wife passed away while he was behind bars.

His first two pictures after his release in 2000 were a portrait of his wife Ma Amar and a work depicting the small prison cell where he spent so many years.

His third solo exhibition will feature 34 pictures, two feet by three feet in size, each priced at US$400. He held his first and second solo shows entitled “Emotion” in Yangon and Mandalay.

Maung Moe Thu, who is affectionately referred to by many as Bagyi Moe or Uncle Moe, told The Irrawaddy: “Artist Bagyi Thet, master of Paw Oo Thet and Win Pe, said that drawing is a happy thing. I still remember his words. I made these paintings because I’m happy. I believe that the viewers will feel something.”