YANGON—For many years, Yangon’s municipal body—the Yangon City Development Committee (YCDC)—has been notorious for alleged corruption and negligence in carrying out its duties. However, hopes were raised when a new municipal law was enacted in June last year. The new legislation replaced the 1922 City of Rangoon Municipal Act and, together with the 2013 Yangon City Development Law, aims to reform the body and improve its services.

The new law creates a vice mayor position to assist the mayor in managing development projects in Yangon and increases the number of elected YCDC members from four to six. It also carries harsher penalties for unregulated street vendors, squatters, littering, betel juice spitting, and destruction of public places and heritage buildings, while more closely regulating businesses, construction and urban planning in the city.

If the YCDC can fully implement the law, it could drastically change the public perception that municipal officials need to be paid to get things done, satisfying residents who have long been unhappy with services in the city.

Yet, eight months after the law was enacted, including a three-month public education period in July, August and September last year, only a few steps have been taken to implement it.

A recent series of photographs taken around the city by The Irrawaddy illustrate the weaknesses in the YCDC’s application of the new legislation. 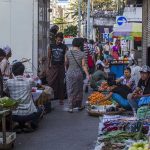 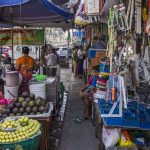 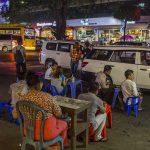 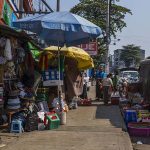 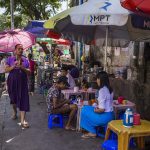 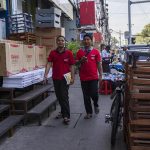 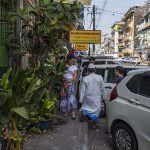 Hawkers and vendors choke the streets of Yangon, posing serious problems including blocking traffic and forcing pedestrians to walk on the streets.

Lawmaker U Than Naing Oo of Panbedan Township said officials had managed to clear street vendors off the pavements of the main downtown roads after the new YCDC Law came into effect. He added that vendors would also gradually be banned from sleeping overnight on the roadsides.

“Personally, I don’t support the forced removal of vendors. We need to explain it to them and raise their awareness of the need to abide by the law,” the lawmaker added.

Yet, many regional lawmakers are frustrated by what they called a cat-and-mouse game. Lawmaker U Wai Phyo Han of Insein Township said that in his constituency, municipal workers clear the sprawl of vendors and stalls from the street sides when complaints are made. But the vendors simply hide out for a while and reappear after the municipal inspections are complete.

Lawmaker U Thawda Aung of Sanchaung Township said roadside vending in Yangon had become deeply rooted after such a long period of neglecting to enforce the law. The vendors believe they are trying to make an honest living, forgetting that it is an offense under the law.

He said unregulated vending also harms the sales of those vendors who obey the law by selling inside of YCDC permitted markets. Some street vendors sell outside in a bid to attract more customers.

The lawmaker said strict action also needed to be taken regarding larger stalls and big shops that intrude onto the streets, in addition to the small roadside vendors. The YCDC Law prohibits any obstruction of public roads, streets and sidewalks; violation carries a fine of 100,000-500,000 kyats as well as a 3-month jail term for repeat offenders.

“The committee needs to enforce the law strictly to prevent the problems from which the residents suffer,” lawmaker U Thawdar Aung added.

Regional lawmaker U Kyaw Zay Ya of Dagon Township cited the YCDC’s poor planning and lack of long-term solutions as major reasons behind the failure to effectively regulate the street vendors.

“They need to have a plan on how and where they will relocate them in each township. But now, there is no such a plan. They carry out raids if there is a serious complaint against them and shoo away the sellers. This is not a solution,” he said. Another vivid example of the YCDC’s failure to enforce the law is the old generators sitting idle in defiance of the 100,000 to 500,000 kyat fine called for in the law. The law also calls for repeat offenders to serve a six-month jail term.

Lawmaker U Than Naing Oo of Panbedan Township said data has been collected on generators that need to be removed under the new law in his constituency. He said the notice would be issued to those who put the generators in place and will give them  some time to remove them. If not, the YCDC must take action against them.

“But we will need to take time to implement it,” he added. 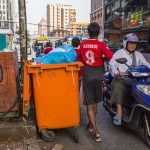 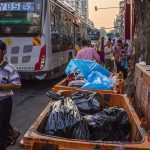 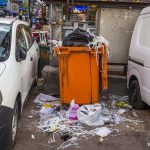 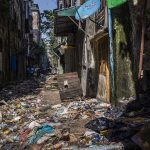 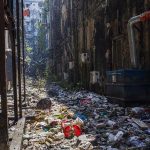 Waste management in Yangon is operated in a piecemeal manner by a team of YCDC employees, hampered by a shortage of waste bins and an upsurge in consumer goods purchases, with streets often cluttered with plastic debris and discarded leftover food in alleyways and gutters.

Lawmaker U Wai Phyo Han of Insein Township said that with the initiatives of the lawmakers, a few townships in Yangon including his constituency have launched a new plan for the municipal staff to collect the rubbish of each household at the residents’ homes two or three times a week.

The plan aims to improve the garbage collection system as well as reduce locals’ throwing rubbish into the alleyways and drains on the grounds that waste bins are too far away from their residence.

But it is far from certain that the plan will be sustainable, given the committee’s limited manpower and equipment. “We have dog lovers but for those who don’t like them, stray dogs are a safety hazard,” lawmaker U Thawda Aung of Sanchaung Township said.

Sanchaung is among the townships with large populations of stray dogs. Most of the streets of Sanchaung are crowded with stray dogs, especially at night. They fight each other over territory and sometimes attack children playing on the streets. It is also a big concern for local residents who frequently call the authorities in to handle the dogs, which also carry the threat of rabies. Yet, the YCDC’s old method of poisoning dogs has been criticized. The committee’s options of vaccination and sterilization have also been carried out on a few occasions.

U Thawda Aung added that those who throw food onto the ground irresponsibly to feed strays should face action as per the law, as it is a dirty habit and the uneaten leftovers create unhygienic surroundings. Under the new YCDC Law, such actions are punishable with fines of 100,000 to 500,000 kyats.

Lawmaker U Thawda Aung of Sanchaung Township said the incomplete structure of the municipal body is a main weakness in implementing the law. YCDC is mainly responsible for applying the law, yet it lacks elected members in the executive and township level committees.

Lawmaker Ko Nay Phone Latt of Thingangyun Township and MP Ma Kyi Pya of Kyauktada Township shared this view. They said that with the lack of elected representatives, the committee members faced huge workloads in managing the development of Yangon.

Municipal elections will be held on March 31. A total of 274 candidates have been registered to run in the elections. There are 99 seats at the township level—three seats each in 33 townships—and six for the YCDC’s executive board.

“We hope there will be improvements after the election. Even if half of the elected representatives really work for the people, they will surely make a difference to the city,” MP Ma Kyi Pya said.