YANGON — For years, Myanmar lived under dictatorship and authoritarianism. But for artist Thoe Hteine, Myanmar has never been a victim of oppression, rather it is a society of revolution.

An ongoing exhibition at the Bo Aung Kyaw Art Gallery on Bo Aung Kyaw Street reflects his perspective of the country. Titled S8it, the exhibition features the works of eight artists, including Thoe Hteine, until Tuesday, priced between US$100 and $1,000.

He is showcasing a series of eight paintings at the exhibition which he says “tell a story” of Myanmar’s revolutionary attitude. 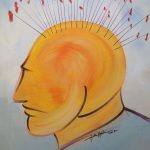 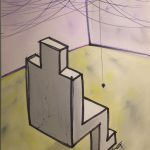 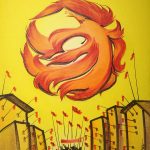 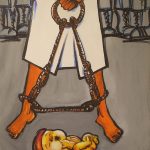 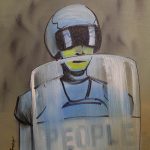 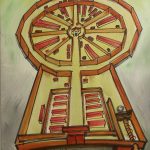 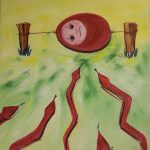 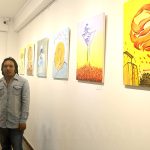 The first painting depicts a chair in an old, cobwebbed room. A chair is a metaphor for the position of power in Burmese language, and the painting shows a dictator who is unwilling to leave his “chair.”

The second painting shows a prisoner in shackles and a newborn baby. “Despite the fact that [dissidents] are arrested, the new generation of revolutionaries continues to emerge,” said Thoe Hteine.

The fourth painting depicts a pinball machine, which the artist compares to Insein Prison. “There are ups and downs, and entry and departure in a revolution,” he said.

“The ball will get in when the player pushes it in, but it will find its way out. But then, the player will push the ball in again. So, the ball gets in and gets out in an unending circle,” the artist said, comparing it to the prison life of so-called dissidents.

The fifth painting shows people protecting themselves rather than being protected by the police while the sixth exhibits the flags of victory in spite of oppression.

A painting titled “The Last Hope—The Last Drop of Water” comes from Thoe Hteine’s belief that there is one hope left for Myanmar’s 50 million people in search of democracy. “We need to drink, when there is only one drop of water left,” the painting reads.