Gen. Thura Shwe Mann gives a present to KPA officials after the MoU signing ceremony on Nov 26, 2008 in Pyongyang.

In November 2008, a 15-member Burmese military delegation boarded a flight from Naypyidaw to Pyongyang, the capital of North Korea, via Beijing.

One year had past since Burma resumed diplomatic relations with the pariah nation after more than two decades of estrangement.

Thura Shwe Mann, then the Burma Army’s chief of general staff, led the delegation. He now heads the Legal Affairs and Special Cases Assessment Commission; formed when the National League for Democracy came to power in 2016. 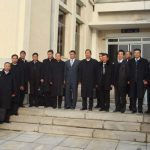 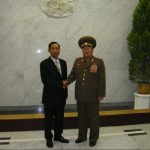 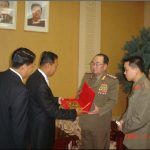 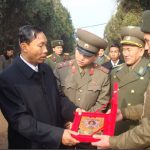 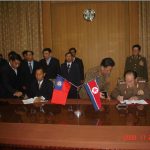 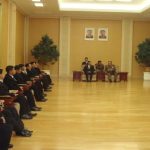 A leaked document about the trip states that the delegation was in North Korea and China from Nov. 21 to Dec. 2 on the invitations of North Korean’s Chief of General Staff General Kim Gyok Sik and China’s People Liberation Army’s Commander in Chief Gen. Chen Bingde.

Here is a selection of leaked photos from our archive documenting the clandestine trip. Apart from the military studies, it also appears in the pictures that Gen Thura Shwe Mann and his North Korean counterpart Gen Kim Gyok Sik signed a memorandum of understanding (MoU), the contents of which have never been verified.