Writer-Turned-Painter Turns His Attention to the Human Form

YANGON—More than 30 years after he fell in love with the nude paintings of Italian artist Amedeo Modigliani, Nay Myo has finally realized his dream of holding his own exhibition of nudes.

“Dirty,” an ongoing exhibition at the Ahla Thit Gallery on University Avenue Road in Yangon, showcases the fruits of that dream.

“I have wanted to draw nude paintings like [Modigliani] since I was an art student in 1982,” Nay Myo said.

“I knew I would draw them someday. So, I have finally realized this dream,” he said.

His nude figures are largely square-shaped with a focus on lines. Yellows and blues are dominant in his paintings, which feature short, “chopping” brushstrokes. His command of texture and tone strengthens the feeling in the paintings.

In Myanmar, nude paintings were censored until 2012, and nudity is still largely taboo in Myanmar society, though more and more people are accepting it as a legitimate subject for artists.

Paintings of nude subjects by artists including Kyi Myint Saw, Sandar Khaing and Myint Naing have gained an audience among art fans of late.

The nude paintings of Nay Myo are distinct from their works in terms of composition and figurative expression, however.

The way he renders the hair and facial expressions of the nude women in his paintings is reminiscent of modernist Win Pe. “We respect him a lot. Of course he has an influence on us,” Nay Myo said.

His fourth solo exhibition, which runs through Wednesday, includes 20 paintings, which can be purchased for USD300 each. 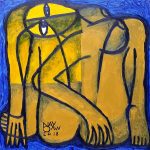 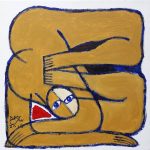 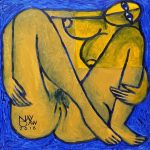 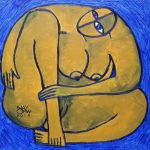 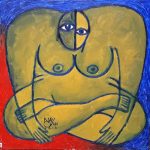 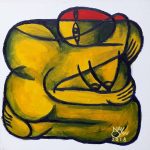 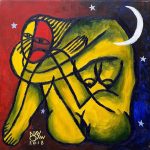 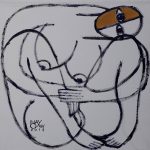 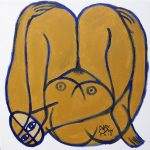 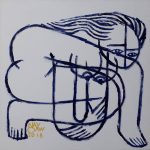 Born in Mandalay, Nay Myo graduated from the city’s State School of Fine Arts in 1983. He made his name with modernist portrayals of rural scenes and Myanmar customs. He is also a renowned writer of short stories, poems and essays.

“Frankly, I just seek to reveal the dark emotions that stain our daily lives,” Nay Myo said about his nude paintings.