A painting from artist Ko Ko Naing's latest solo show at the Panthuriya Art Gallery in Yangon, “Urban Atmosphere, Far and Near.”

YANGON — Among the 7 million residents of Yangon, how many can truly appreciate the city’s beauty and its age? Artist Ko Ko Naing is surely one.

“Yangon is splendid. Its buildings look like those in London. I am interested in them,” said Ko Ko Naing, who has spent more than three decades in Yangon’s art circle.

The artist usually enjoys the beauty of Yangon on its streets and among its high-rise buildings. He sometimes stops in a crowd to gaze at a building or take its photo. He is now showcasing his paintings from those experiences in “Urban Atmosphere, Far and Near” at the Panthuriya Art Gallery in Bogalay market, his sixth solo exhibition. 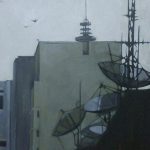 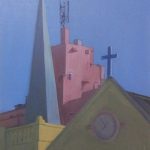 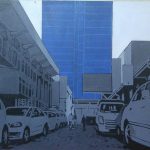 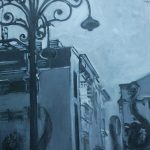 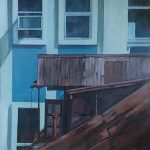 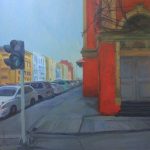 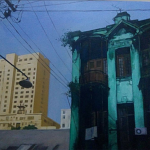 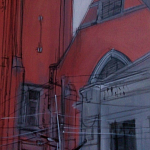 A government printing factory. The Secretariat building and telegraph office. Independence Monument. The Evangelical church on Bandoola Road and the telephone towers above it. Satellite dishes on rooftops. A new building on Bogyoke Aung San Road. To Ko Ko Naing, they not only calm the heart but make him aware of the rivalry between new and old. For the buildings demolished since he painted them, his works are also a historical record.

“Things have been changing since 1988. Some of the scenes of Yangon have disappeared. Lower parts of buildings have been covered with shop signs. These are the things of the past,” he said while putting the finishing touches on a painting of the government printing factory, which is more than a century old.

Fifteen of his paintings will be on display in the exhibition, which runs from Nov. 2 to 6.

A native of Moulmein, in Mon State, Ko Ko Naing learned to paint from his grandfather and father. With the help of Maung Maung Thike, a famous artist, he stared working as an artist himself and became known for his portraits of urban scenes. He has joined many group exhibitions and teamed up for shows with British artists Kate Bowen and Dutch artist Ietje Preel.