The Art of Politics

Twenty-five artists reflect on political changes in Myanmar at an exhibition at the American Center in Yangon.

YANGON — Offering their personal reflections on political changes in Myanmar over the past decade, dozens of artists, sculptors, installation artists and photographers are showcasing a wide array of art at the American Center in Yangon.

At the entrance of the exhibition hall, Pe Nyunt Wai’s paintings of Daw Aung San Suu Kyi hang on the wall to mark the birthday of Myanmar’s de facto leader and State Counselor, who turned 72 on Monday. 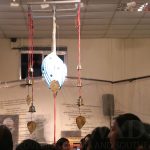 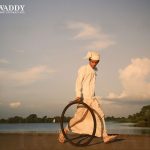 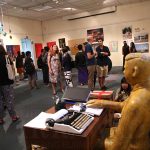 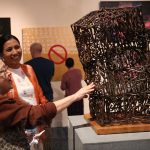 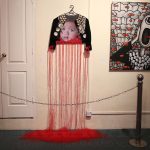 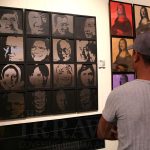 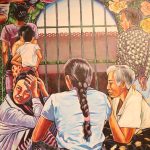 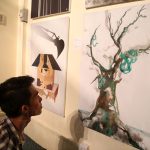 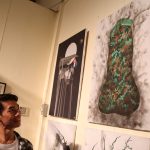 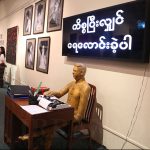 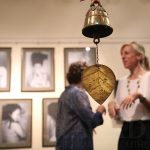 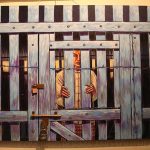 There also hang two paintings by ethnic Karen artist Zoncy that reflect the ongoing civil war that the country has experienced since its independence in 1948.

The first painting shows a penis, depicting the plight of women who were raped during the war.

The second painting shows an old, bare tree with snakes curling around it.

“This tree is situated at U Bein Bridge in Mandalay. I thought it was too dry to survive. But, whenever I go to U Bein, it is still there. That tree is like our country. The snakes on the tree eat any new buds and never leave,” she said.

The art exhibition ‘Artists Beyond Boundaries’ is sponsored by the American Center and features the works of 25 artists. The first edition of the exhibition was held about 10 years ago at the residence of the US Chargés d’ Affaires.

This exhibition showcases works that were banned by the previous government or altered fearing that the former government would not allow the originals. The exhibition continues until June 29.

Htein Lin’s installation is a focal point at the exhibition, as he applies his sense of humor to highlight the deep-rooted bureaucratic practice of grease payments in government offices.

On a lightbox behind his installation is written ‘Keiq-sa pi-yin, ye-laung-keh-ba’ which translates as ‘When your business is completed, please pour water.’ This is a phrase regularly found in bathrooms to encourage users to flush. But at the same time, water is a slang term for money in everyday Burmese language.

Htein Lin put these words behind an office desk, with a long hand extending ‘under the table’ to shine a humorous spotlight on the ongoing challenges that Myanmar still faces in combatting corruption.

“As you know, bribery is deep-rooted in Myanmar. ‘Pour water’ is a phrase you can hear at government offices. And the same phrase is used in bathrooms. So, I linked the offices and toilets,” Htein Lin said.

In his installation, modern sculptor Chan Aye hangs Bayan leaves and bronze bells – religious Buddhist objects – from the ceiling along with a playback of ringing bells from Shwedagon Pagoda.

“My work is in response to the negative impression of Buddhism created by some Buddhists at present,” said Chan Aye, referring to the activities of some nationalist groups.

“In fact, Buddhism is an ism of loving-kindness. It is peaceful,” he added.

Another sculptor Sunny Nyein showcases a sculpture made of 645 iron rods, which refer to lawmakers under U Thein Sein’s administration. This work reflects their absence from politics since they left Parliament.

“These three are key. It has been one year that I haven’t seen former lawmakers,” he said.

“We see through the exhibit that art can be a very powerful tool in expressing a community’s struggle and achievements. We feel freedom of expression is a vital part of any democracy and we continue to encourage and support freedom of speech in all its forms throughout Myanmar,” said Kristen F. Bauer, Deputy Chief of Mission at the US Embassy in Myanmar.

Exhibition organizer Pamela Blotner said when she first came to Myanmar in 2006, she fell in love with the artists and the culture.

“It was wonderful, but I had to leave the country. So, the idea was to come back and to finish,” she said. “The history here is fascinating. And I do not think anyone was really telling the story of what it means for a culture to go from religious spaces to colonialism to a dictatorship to the internet age in such a short time.”

Art helps people process and understand transition. That is part of the aim of the show and also one of my dreams in life, Blotner added.