‘Deadly Rhyme’ will be held at New Zero Art Space gallery on Alanpya Pagoda Street in Dagon Township from Dec. 29 to Jan. 11.

Inspired by bedridden patients and death, Khit Bhone Mo, who himself has been at death’s door, has painted his first solo exhibition on the last chapter of human life.

The artist, who suffered from heart problems, underwent a surgery in 2014. “I didn’t want to die before I could organize my own exhibition,” Khit Bhone Mo, who used to be an illustrator, recalled his struggle.

Lying on a hospital bed for weeks, he saw many deaths—some quick and some lingering— that left strong impressions on him.

“Patients around my bed died one after another. Then, I came to realize that skins [appearances] are not important. Muscles are not important either. But without a heart, everything ceases,” the artist said. 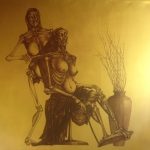 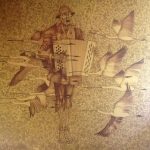 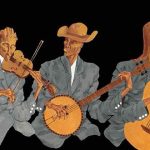 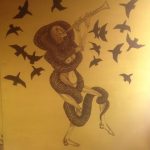 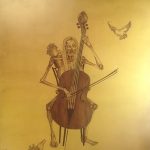 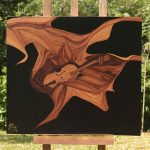 Although his experience had given him some aspirations, he was not able to work on his solo show until early 2017, when he met artist Aye Ko, the founder of New Zero Art Village.

Then, Khit Bhone Mo became the first person to win the artist residency award given by the New Zero Art Village, which funded and accommodated him to paint his solo art exhibition.

In May, he went to a tranquil village in Hmawbi Township on the outskirts of Yangon to draw what he saw and felt some four years ago at the hospital.

He was alone at a house on a spacious compound in absolute silence, and a few days later, he started to feel the need for music.

“I only heard the twittering of birds those days. It was not enough. Then, I felt hungry for music.”

Then, a man he saw at the hospital, who had his leg amputated because of heart failure, came to his mind. “I remembered him murmuring a song while patting his thigh. He was soothing himself with music.”

This gave him the idea to mix death and music, as his solo exhibition features skinny figures playing different musical instruments such as piano, violin, and accordion.

In one of the paintings, a woman is playing a clarinet despite being coiled by a big snake. “I would like to portray the inner strength of women against the troubles of life.”

The exhibition ‘Deadly Rhyme’ features 12 paintings, each priced at $1,500, at New Zero Art Space gallery on Alanpya Pagoda Street in Dagon Township from Dec. 29 to Jan. 11.