Than Htay uses collages made of pictures to depict Myanmar’s landscapes and people. / Thet Tun Naing / The Irrawaddy

YANGON — Before he made his name as an artist, Than Htay, 59, from Yangon’s Bahan Township, regularly dumped his paintings into garbage cans around Urayasu, a small town in Japan, where he was studying mechanical engineering in the late 1980s.

He asked his Japanese roommate to help him get canvases and paints so that he could paint in his spare time, but his room was too small to keep all the art, so he dumped much of it to make space for new paintings.

Throwing away some work one day, Than Htay was approached by an old Japanese man who expressed his admiration for the art. With the man’s help, Than Htay began showcasing his paintings at local art exhibitions, launching himself into Japan’s art scene. 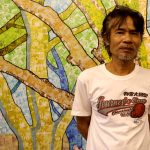 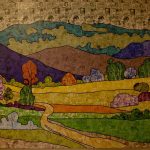 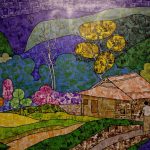 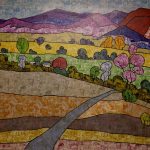 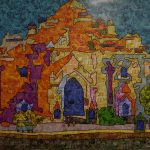 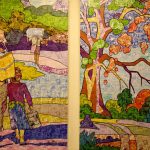 In 1992, he won several awards in Urayasu, paving the way to solo shows in Tokyo from 1998-2003. Between 1996 and 2004 he displayed his work at the Tokyo Museum with the Japan International Artists Club and won best painting and best drawing technique awards.

He later became a member of the Artist Friendship Association of Asia in Japan, and his paintings were brought to hang on the walls of the Beijing National Museum and Korea National Museum.

Than Htay has now held dozens of solo and group art exhibitions in Myanmar and abroad. His 16th solo exhibition “Beauty Is In Our Own Hands” is currently being showcased in Yangon.

For the exhibition, Than Htay collected more than 300 photos from his friends and the Internet that capture the everyday lives of people across Myanmar.

“It would have been better if I had gotten more photos,” Than Htay told The Irrawaddy.

He digitally adjusted the colors of the photos before printing them and sticking them on canvases. Four by five foot in size, the collages depict the landscapes of Shan State and central Myanmar, as well as the people living in those areas.
On closer inspection of the collages, one can see they comprise hundreds of photos, including images of ethnic people, monks, children, and Daw Aung San Suu Kyi.

The collage showing one of Bagan’s most famous and biggest structures, Dhammayangyi Temple, was sold on the first day of the exhibition on July 8.

“I just wanted to combine the landscapes and people of Myanmar,” Than Htay said of his latest exhibition.

Fellow artist San Min said the theme of the latest exhibition was not unusual but the technique was particularly appealing.

“No one has ever created like him—making pictures with photos. What others have done is perhaps stick bank notes [onto canvases],” said San Min.

Curator Ko Pyay Way, who came up with the title of the exhibition, said, “He has combined characters with beautiful landscapes. I thought if people in the real world made their environment beautiful, then we would have a beautiful world. So, I got the idea that beauty is in our own hands.”

From throwing away his art to receiving applause and displays in countries such as China, Korea, Singapore, and the United States, Than Htay is an artist Myanmar can hold proudly.

His 16th solo exhibition runs at Nawaday Tharlar Gallery on Yaw Min Gyi Street, Dagon Township until July 14. Each of the 14 collages on display is priced at US$2,500.