In Artist’s Hands, the Constitution Is an Unedifying Spectacle

YANGON—Myint Soe prepares a large bell-mouthed pan, which he has placed atop a green gas cooker. Scattered around the pan are spoons and wooden ladles.

Given the presence of the utensils, and the title of his latest exhibition, “Consume”, it appears at first glance that the artist is cooking a meal for visitors to the Nawaday Tharlar Art Gallery. In fact, he is serving up a metaphorical depiction of the 2008 Constitution, which is known as the “Green Book” due to its green cover.

The pan contains only boiling water and some coriander—not much of a meal. Moreover, the spoons and ladles are riddled with holes. The installation symbolizes the less-than-nourishing democracy that has emerged from the 2008 Constitution.

“I ‘cooked’ [a meal of] law and democracy based on the 2008 Constitution. But you can’t serve it up to be eaten [because of the holes in the utensils]. You can’t get the essence of democracy because of these limitations,” said the artist. 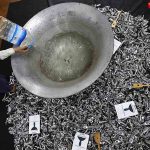 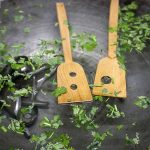 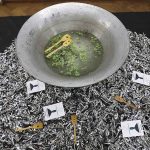 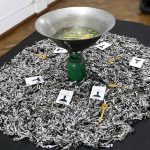 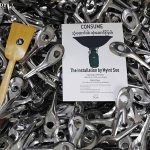 The installation can be viewed through Friday at the Nawaday Tharlar Art Gallery on Yawmingyi Street in Yangon.

Known for producing installations that tackle political and social issues, as well as environmental conservation, Myint Soe used 6,000 spoons to create the artwork. He said he didn’t write “2008 Constitution” on the green gas cooker in order to leave some room for viewers to interpret the piece.